So What is React, Really? 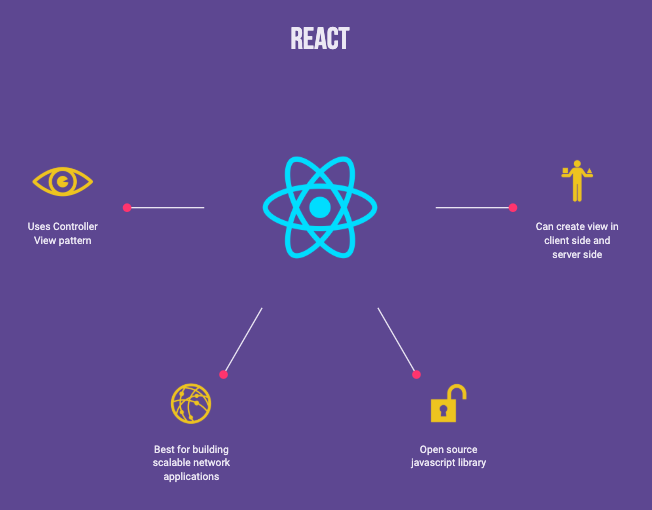 React.js provides high performance client and server side rendering with a one-way flow for data binding. It is based on building reusable chunks of code which are components, more of a library, which makes it quite easy to work with.
React is more of a library than a framework. It can best be described as an application view that allows the programmer to utilize reusable components. It is composed of its own React libraries, tools, and solutions that developers can use to build their own Js framework.
React server side rendering
React boasts a unique feature that facilitates quick rendering of content, for better user interaction. A virtual React DOM allows both client side and server side rendering which decreases the page load time.Facebook,a high user traffic site employs React Js since it delivers amazing user experience, which is vital for a website of its caliber.
Re-usable components
React is built around development using components. Common react design elements can be broken down to individual components. React Buttons, fields, forms etc, can be saved and reused for a later time when the application developer intends to create another mobile or web UI project. This saves time and effort for the coder as they don't need to write code again for the same components in the future. s: A Perfect Library for Making Interactive Websites
ReactJs offers the developers with a superior quality server and client-side rendering with one-way flow for data binding. Based on reusable code chunks, also known as component, it makes it easy for developers to create interactive websites. More than a framework, it is a library that has tools and solutions using which React Js Developmentcan become easy.
Given below are some of the benefits of the framework:
1. Reusable Components
As ReactJs is built using reusable components, you can break react design elements into separate components. The developers can make use of forms, fields, buttons etc. again whenever they want to create a different web user interface or mobile application. Needless to say, it saves a lot of time and efforts spent on coding.
2. Faster Content Rendering
The best part about React is its ability to render the content quickly so that your users can have a better interaction with your website. It comes with virtual React DOM that enables both server-side and client-side making rendering. This lessens the time to load pages.
Why Go for ReactJs?
Here are the reasons why you should go for ReactJs:
* Enables developers to create templates based on pure JavaScript
* Allows server as well as client-side rendering
* Comes with reusable components
* Offers tutorials to help developers sharpen their skills
Benefits of adopting React Js
* It keeps a virtual React DOM which randomly updates parts that have been changed or those that need to be updated.
* React allows both client and server side rendering.
* It provides an option for pure JavaScript template creation.
* React JS components are highly re-usable.
* React comes with a small API. Beginners will find it easy to learn and start using it.
* React Native, an offshoot of React Js allows use of Javascript to write Native IOS applications.